On Lassa Fever, the YWCA and the power of community connections

In the past couple of months, I’ve had the chance to publish a couple of pieces of longer-form journalism. And, wow, it’s been a while.

If you know me, you know I worked full-time at the York Daily Record/Sunday News for the past 15 years, until I took a job at Penn State College of Medicine earlier this year.

I’ve written what seems like a metric ton of blog posts and columns during the past decade, but most of my work at the paper was in editing and management, not reporting, since I left the obituary-story beat in 2004.

I love to write, but putting out a newspaper – all the non-writey parts – takes up a lot of time, and I rarely could do anything that required any in-depth research or focus.

So when two different stories I’d been interested in for a while came together this fall, thanks pretty much entirely to the power of community and the internet, I was stoked. 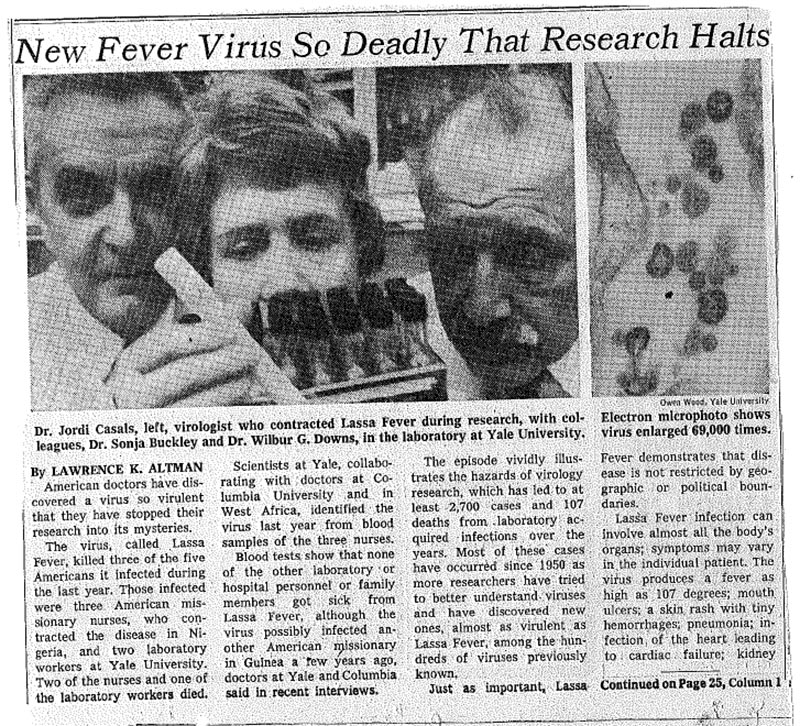 Delma Rivera-Lytle and her family saved this and many other newspaper clippings following the 1969 death of her uncle, Juan Román, of Lassa Fever. Juan died during a Thanksgiving visit to York County.

It all started with a used bookstore and a blog post.

See, for years, my dream was to go to medical school. It didn’t happen, but my interest in the field didn’t change, and most of my reading (both fiction and nonfiction) is based around medical topics.

Sometime in 2012, I picked up an old book at a used book sale. It was “Fever: The Hunt for a New Killer Virus,” published in 1974, a nonfiction look at the spread and diagnosis of Lassa fever in the United States from the late 1960s to the early 1970s.

So I’m reading and get to a passage about a man from New Haven, Connecticut, who went to visit family for Thanksgiving in 1969, got sick and had to be hospitalized, and then later died — at York Hospital.

The man, Juan Román, had what would later be diagnosed as Lassa fever, a disease known to have killed only four people in America. And one of those deaths took place here? What the actual?

Of course, I had to know more. I started doing some research, and in early 2013, I posted on my Only in York County blog, seeking information from anyone in the area who remembered Juan Román’s case.

For almost two years, things were quiet. But in the fall of 2014, I got a phone call from Delma Rivera-Lytle of Seven Valleys.

“That man who died of Lassa fever… that was my uncle,” she began.

I spent hours talking to Rivera-Lytle and to her cousin and Juan Román’s daughter, Lily Román, as well as to experts on Lassa from the United States Army Medical Research Institute of Infectious Diseases.

Juan Román’s life and death, and York’s connection to this uncommon virus, were largely documented as footnotes to more famous cases. Thanks to Delma and Lily, I got the chance to tell the full story, which you can read here.

Annemarie Baker of West York shared a clipping from 1954 about the YWCA’s residence halls.

This, too, started out with an Only in York County post. I shared the clipping above and a note from Annemarie Baker, who recalled living in the YWCA’s residence halls in the ’50s and had kept that article.

So I was excited to work with Dana and YWCA York intern Danie Martin to gather some photos that begin to tell the story of the YWCA in York through the years.

Right now, the people in the photos seen with the story below are unidentified. But, as I said in a note with that article, I’m sure each woman pictured has a story to tell about the influence of YWCA York in her life, and I hope we can go full circle and get them in touch with the organization.