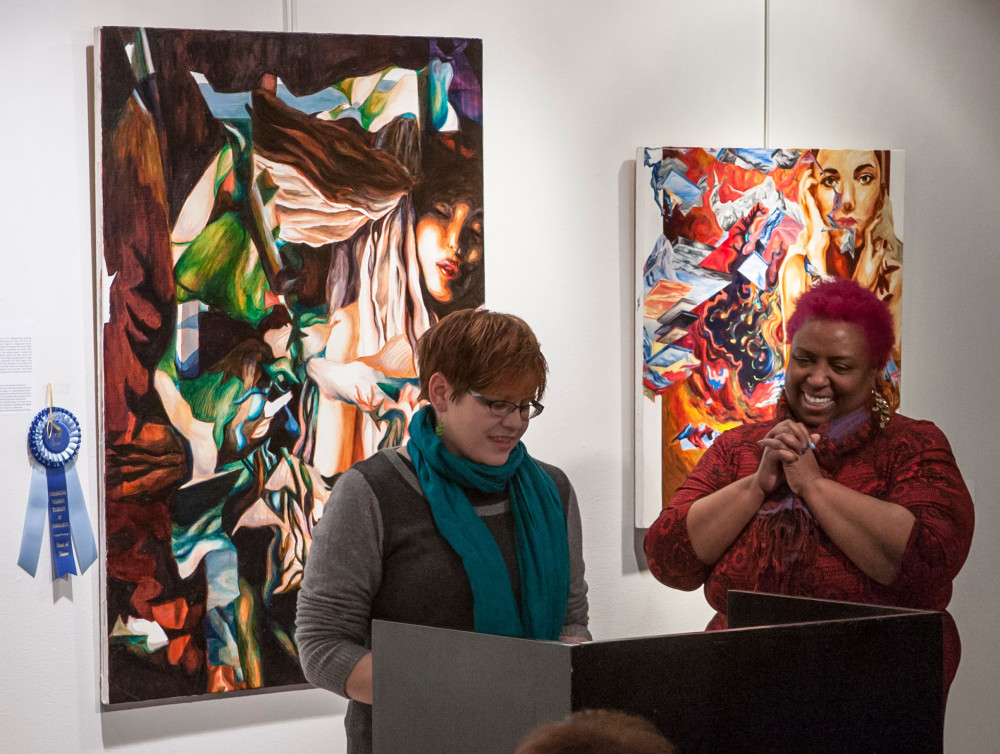 As part of the 2014 YorkArts Writers’ Eye competition, I wrote and won second place for a poem titled “The Common Raven,” which was written in response to a painting titled “Light Pouring Down” by artist Linda Sommer. Later, local artist Missi McLaren Ritter painted a work based on the same poem for a HIVE Artspace exhibit. It’s a bit like playing telephone with art and words. Here, I’m seen reading “The Common Raven” in February 2015 at the reception for Writers’ Eye winners.

As a roundup of show and award updates, since I’ve last posted, both my son, Ashar, and I have had works on display at both The Parliament and the York Art Association.

In November 2014, Ash’s work Geordi’s Visor and my Peacock were featured for The Parliament’s Best of 2014 show.

And from November to December 2014, Ash’s work The Dragon and my Grapefruit Sunrise were on display at the York Art Association as part of the 2014 Adult Juried Art Awards. (Didn’t win an award, but we were thrilled to be selected to take part!)

Then, starting Feb. 6, 2015, we both had works in the “art in mARTin” gallery at Martin Library in York as part of their “Out of Winter, Out of the Blues” exhibit, which continued through April 20. Ash’s works Random Fun and Jazz Bluebird were featured, as were four of mine: Fractal; Tsunami Relief; Peacock and In Bloom.

Also on Feb. 6, 2015, I was honored to read a piece of poetic prose I wrote as part of the YorkArts Writers’ Eye competition, in which I placed second in the adult division for a work of poetry called The Common Raven.